I love that you chose “Stonecutters Song” from “Homer the Great” – a personal favorite of mine. Whose idea was it to change the lyric from “Who makes Steve Guttenberg a star” to “Kim Kardashian”?
“And ‘Oscar’ to ‘Emmy.’ That was producer Mark Watters’ doing. It was really funny.”

Was last night the first time you’ve had your “Simpsons” music performed to an audience with a live orchestra?
“Actually it was the second time. We had an event on the Fox Lot, for the ‘Simpsons’ Fan Fest. Winners were flown in and hosted as guests on the Fox lot; this was several years ago. As part of their reward, we had a big stage set up outside. We had the orchestra on the stage and we performed playing to the ‘Simpsons’ clips. The crowd just loved it.”

The “Simpsons” episodes that feature song parodies seem to be the most beloved by fans, myself included. Are they fun for you? Or are they just more work?
“That’s an interesting question. They are more work because I can’t just sit down and write. I have to spend some time researching and listening to the original tracks I’m supposed to emulate. Once I figure out what’s going on, I make my initial notes about what would remind the audience melodically, harmonically, organically, rhythmically, orchestrationally, and everything else that goes into making that first song a hit. Once I figure how that all out, I try to craft my own song that contains those elements but which has my original touch. It doesn’t happen overnight, but fortunately for me, the producers are very supportive and give me the necessary time I need. My schedule doesn’t force me to record a score every week. Sometimes we’ll record only two episodes in a row before getting a week’s break. That is intended to recharge all of us and keep us going. It’s a bit of an unusual schedule in that I’m responsible for underscore and original songs as well.”

Do you watch the show?
“Oh yeah. I watch every Sunday night in prime time, to review myself. I’m always my own worst critic. We’ll record on a Friday, mix on Monday or Tuesday, and air the following Sunday. I always make sure I watch every episode to make sure what I intended to happen with the score has happened, and that the producers didn’t drop or modify something. We have a ‘pow-wow’ the next week to find out if or why they dropped or added something.”

It sounds like all on the team have a very hands-on approach to the show,
“We are all very hands-on. That’s what I love about it. My exec producer Al Jean, he’s very hands-on. He and I have a shorthand now in music spotting. He can describe a scene and tell it to me in emotional terms, and I can tell what the music should be. We don’t speak music-speak. We just speak emotion.”

To date you’ve scored 534 of the 550 episodes. How many cues is that?
“I had a tentative count last year; over 12,000 cues. Since we started the show, we have kept consecutive take numbers of every cue that we record, so when we go back to find something later, it’s easier to find. Not too long ago, we passed 30,000 takes. It’s nuts! It’s really wild.”

After 25 years, is it difficult to keep things fresh?
“It’s a challenge. No question about it. The toughest part for me is the schedule. How can I describe it…? It’s unrelenting. And unforgiving. We’re responsible for turning in a completed episode to the network and the schedule has to be backed up from there. Usually we have a bit of play-room, but not much. If something goes haywire down the road, everybody suffers. Something could happen to the animation a year before the air date, and it affects every person down the line. Say I asked for two weeks, but all of a sudden my drop-dead air date doesn’t change and I lose a week because of something beyond my control…D’oh! So the schedule is a challenge, but we shall prevail!”

Which “Simpsons” character do you most identify with?
“Comic Book Guy.”

You responded to that extremely quickly!
“You can tell it’s a true feeling. I have three children and we used to visit the comic book store in Northridge on Reseda. The owner is so like the ‘Simpsons’ proprietor; it’s really a hoot. I just love it when he says, ‘Worst… episode… ever!’”

There’s a “Simpsons” quote for every single moment in life. I speak several throughout the day, every day.
“(Laughs) I do too. We’re all in need of emotional help, you know. My favorite is when Lisa is in the backseat of the car and says, ‘Could this be the end of this series… of events?’”

The show still uses a full live orchestra, something becoming more of a rarity each year.
“It’s thanks to Matt Groening and his enjoyment of having acoustic music. The reason he enjoys it is that sometimes when the final animation comes back, it’s a little rougher than they’d prefer, and he says acoustic music smooths out the animation…that in addition to bumping up the emotion and giving more of a heightened sense of reality to whatever scene I’m accompanying. It gives the scenes legitimacy.”

The music gives a real warmth to the show.
“We can combine all those feelings at once. I like to say I can make you feel five ways in 13 seconds on this show. We can turn on a dime from comedy to a real poignant scene; we don’t ever stay with a single emotion very long.”

Do you have any particular tricks to infuse humor or a particular mood into a musical cue?
“Yes, but I’ll never tell! I need every trick I can get.”

It’s so great to know that after all these years you still appreciate “The Simpsons.” And it really comes through in your music.
“How could I not appreciate it? In my situation ‘The Simpsons’ has taken over my life. My dedication to the show is 1000%. I’ve accepted the fact that I probably don’t get a certain number of calls because they know that I’m so busy. Which is just fine with me. We’re scoring mini-movies every week. I don’t have to spend many, many months on a single score and many, many more months on a different project. Full-length features would have been great, but I love the instantaneous satisfaction of TV.”

You originally didn’t want to take on this job. How would life have been different if you hadn’t changed your mind?
“I probably would have been lucky enough to pursue a career as a drama composer for movies, features-of-the-week, and TV shows. But ‘The Simpsons’ is a whole different deal. So many times the laughter factor is worth its weight in gold. I can go to a music spotting and see the episode for the first time and get true belly laughs every week. It’s so intensely funny — you can’t buy that. It’s something that has to happen from within.”

“You mean there’s been cake in our freezer for eleven years?! Why was I not informed?” – Homer J. Simpson (Episode 203, “Natural Born Kissers”)

At the Bridge Recording on May 9, “Simpsons” orchestra musicians surprised composer Alf Clausen with a cake to celebrate his 25 years writing music for the series. Photos by Gayle Levant. 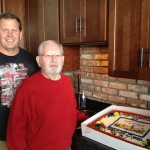 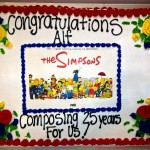 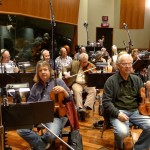 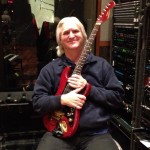 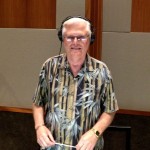 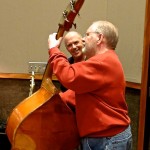 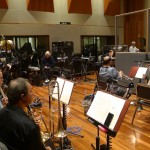 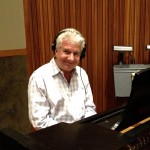 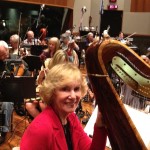 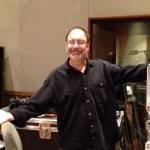 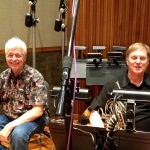 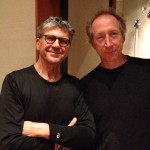 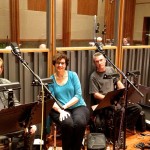 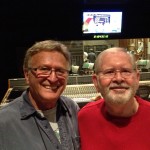 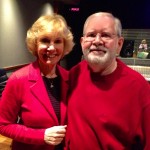