The unlikely and continuing musical journey of a lifetime … so far I had no idea how or why as a teenager I fell in love with Tony Bennett’s music. It happened sometime in the early seventies. I was a young kid playing drums in my high school jazz band in the San Francisco east bay area with all the dreams of making it as a pro someday.

Tony Bennett would regularly appear two or three times a year at the Fairmont hotel Venetian Room in San Francisco. Whenever he was in town, I would drag my girlfriend, who would have much preferred to be at the Fillmore to Tony’s buttoned down, coat and tie concert. END_OF_DOCUMENT_TOKEN_TO_BE_REPLACED And then there were 15… Superstar AFM Local 47 member John Legend joins the exclusive EGOT club with his two Emmy Arts wins as lead actor and co-producer for “Jesus Christ Superstar Live.” He is one of the youngest people ever to win all four Emmy, Grammy, Oscar and Tony awards. 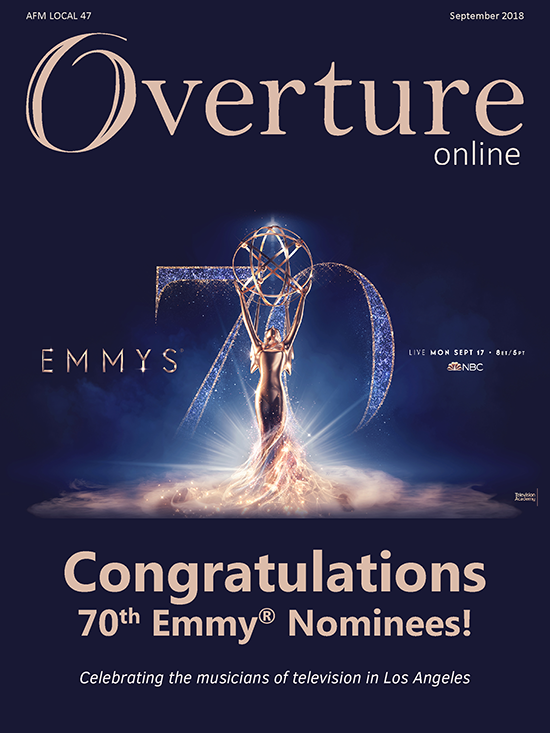 Curious About Medicare?
Union members and retirees are invited to register for a free webinar to learnmore

Overture Online is optimized for reading via smartphone or tablet. For those without access to a smart device, issues may be viewed on a web browser here. Local 47 members may download archived pdf versions from the members section at afm47.org. END_OF_DOCUMENT_TOKEN_TO_BE_REPLACED The 4th Annual Made In Hollywood Honors For Television awards honored this year’s Emmy-nominated shows produced in California and the Los Angeles area in a star-studded program the morning of Sept. 7, 2016.

Musicians were proud to celebrate the many productions that were also scored here in the state. Check out the list & full story at listen-la.com! Congratulations to all the Los Angeles AFM Local 47 members who received 67th Annual Emmy Awards nominations, and to all of the talented L.A. musicians who performed on an impressive 50 of this year’s nominated series, commercials & TV specials!

View the full list of Local 47-scored nominees at listen-la.com!

On the heals of two new Emmy nominations for his music for “House of Cards,” Jeff Beal talks about composing for the hit Los Angeles-scored series

To date, Beal has won three times, including for the 2007 TNT miniseries “Nightmares & Dreamscapes” and USA Network’s detective series “Monk” in 2003, which were also scored here with our wonderful Los Angeles musicians.

Recorded at his home studio, music for “House of Cards” features more than a dozen of L.A.’s premiere string musicians. Beal spoke with Linda A. Rapka from his home studio about composing for the hit series.

Congratulations on your recent Emmy nominations for “House of Cards”! For both seasons, you’ve recorded in your home studio with Los Angeles musicians.
“They’re fantastic. I have a room in my studio where I do a lot of live recording. With the tight schedules and turnaround times these days being what they are, I love being able to call on the best players in the world and have them available at the drop of a hat. It’s a luxury to work with them. They know the kind of stuff I write, and over the years we have developed a shorthand with each other. It’s nice not having to over-explain to musicians your approach to making music; here a lot of that is sort of a given.”

Read the full interview at listen-la.com