Thank you to the 55 members who attended our Spring Membership Meeting on the evening of April 25, 2016. 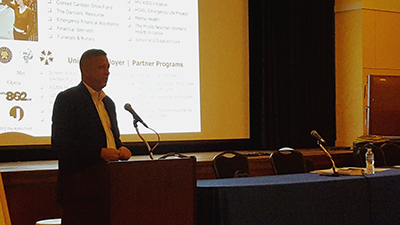 Keith McNutt from The Actors Fund addresses the membership.

The meeting commenced with a presentation by Keith McNutt about The Actors Fund, a nonprofit organization that serves not only actors, but everyone in entertainment. He provided a thorough rundown of their history and background, and the many free services and workshops they provide of benefit to musicians, dancers, actors and other entertainment industry professionals. More about The Actors Fund can be learned at actorsfund.org.

Members then voted on three resolutions to amend the Bylaws. Resolution 1, regarding the duties of the Officers and Executive Board and the Local’s budget calendar, failed by a vote of No 40, Yes 10. Resolution 2, concerning publications in Overture pertaining to the Local 47 Biennial Election, passed by a vote of Yes 48, No 2. Resolution 3, regarding due notice to the membership, passed by a vote of Yes 46, No 4. The updated Local 47 Bylaws have been posted in the members section at afm47.org, and print copies are available upon request from the Secretary’s Office by calling 323.993.3159.

Elections for the Salary Review and Election boards followed, with members being nominated from the floor. The results are as follows:

On the Wednesday following the meeting, Mark Zimoski was named chair of the Election Board. The Salary Review Board will name a chair at their next meeting.

Officers then delivered their reports. President John Acosta led a PowerPoint presentation of an overview of the year to date, reporting on new Collective Bargaining Agreements, negotiations updates, legislative news, and the status of the pending building sale. Vice President Rick Baptist reported on his ongoing involvement with the Local’s outreach program, delivering presentations to music and film students at local colleges and universities. He noted that he will be attending the upcoming Live Television negotiations in New York in June. Secretary/Treasurer Gary Lasley provided an update on the Local’s financials.

We look forward to seeing you at our next General Membership Meeting July 25 at 7:30 p.m. in the Serena Kay & Earl Williams Auditorium.