Bob Efford, 91 years young, passed away April 29, 2019, at his Malibu home. He is survived by his son, Bob Jr. and family; half-brother John Collin; and nephews and nieces. END_OF_DOCUMENT_TOKEN_TO_BE_REPLACED Time: Church Service – 1 p.m.
Reception/Celebration of Life – 2-4 p.m.
In lieu of flowers, the family asks that you consider donating to Inspiring Notes, Inc.,
a 501(c)(3) nonprofit whose mission is to create classical music experiences that educate, enrich and inspire our youth and families in the San Fernando Valley, and help to fill the gap in music education in our public schools.
Ethmer performed and taught music to young and old all of his life. His participation in the Inspiring Notes free music education program gave him the opportunity to  teach more than 30,000 youth these past 11 years.
Please send your donations to:
Inspiring Notes, Inc.
11100 Sepulveda Blvd. # 292
Mission Hills, CA 91345
Your contributions are tax deductible.
Tax-exempt ID number is 71-1051594 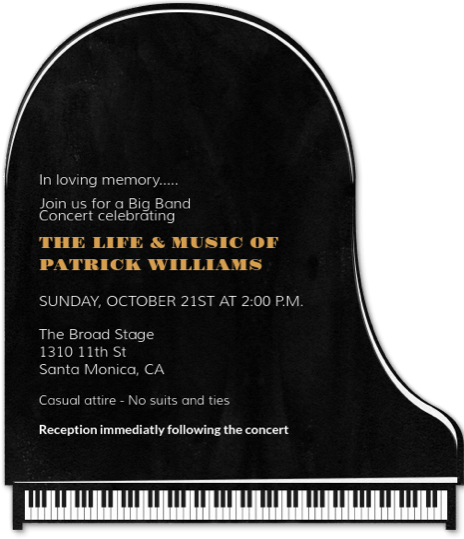 All are welcome. There will be friends, family, music and libations. Friends and colleagues are also invited to sit in and play tribute with our rhythm section. If possible, please RSVP to sunny@sunnybain.com, to help with our guest count. We hope you can join us. We are saddened to share news of the passing of member Armen Ksajikian’s mother, Seta. Isabelle Daskoff was born in Illinois, but moved to Los Angeles when she was a child. (Her mother hoped that Isabelle and her sister, Bernardine, would become child movie stars.)

After graduation from UCLA, Isabelle moved back east, where she married Ralph Samuels, a noted photographer from Manchester, England. She was a longtime member of the New York City Opera Orchestra.

Relocating to Los Angeles in the early ’70s, Isabelle was active in the orchestras of the recording, motion picture and television industries, and in symphonic concerts. For many years, until her retirement, she was a member of the orchestra of The Simpsons. A memorial service will be held at 10 a.m. on Saturday, March 25, 2017 at Todd Memorial Chapel in Claremont, CA, followed by graveside service at Pomona Cemetery in Pomona, CA.