Helping all of our musicians get back to work while protecting your health and safety continues to be our number one priority. AFM Local 47 has been working with adjacent unions, management, both the City and County of Los Angeles, infectious disease specialists, rank-and-file musicians and scoring stage crew, as well as gathering the growing body of scientific studies of safety for orchestral musicians being gathered both here and in Germany and Austria.

The Local 47 Executive Board has adopted a series of recommendations created by the Post Covid-19 Work Rules Working Group to ensure safe work environments for post-production music that can allow millions of dollars of wages to return to the thousands of musicians who provide the world-class scores for the projects that California and Hollywood depend upon. END_OF_DOCUMENT_TOKEN_TO_BE_REPLACED

Concerned about the future of our Pension Fund? You’re not alone. The question is — what can you as an individual do?

There is a U.S. Congress Joint Select Committee looking for a solution for pension funds like ours. We are not alone, and neither are you.

Our Pension Fund has created a page that gives you the tools to be heard.

END_OF_DOCUMENT_TOKEN_TO_BE_REPLACED 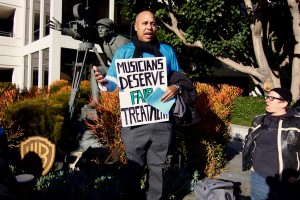 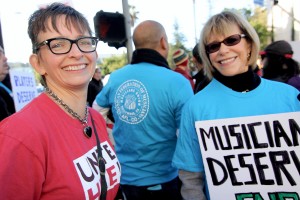 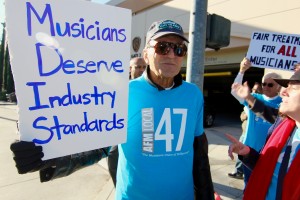 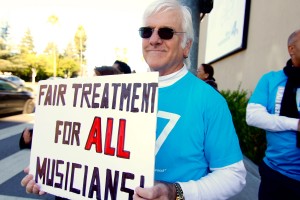 BURBANK, CA (DEC. 15, 2015) — More than 50 members of the American Federation of Musicians Local 47, Unite Here Local 11, and other unions and community supporters held a large demonstration Tuesday morning against the exploitation of musicians taking place on the Warner Bros. lot.

The group distributed leaflets objecting to the studio’s facilitation of non-union activity on its property. Warner Bros., signatory to the American Federation of Musicians, permitted a non-union “dark” date by Cinema Scoring, an employer with whom AFM Local 47 has a labor dispute. END_OF_DOCUMENT_TOKEN_TO_BE_REPLACED Members of the California Film & Television Production Alliance, AFM Local 47 and RMALA stand alongside fellow entertainment guilds and thousands of hard-working men and women up and down the state in commending the governor and a band of state legislators who yesterday confirmed that California’s film and television production incentive program will be expanded, extended, and improved through the passage of AB 1839. The bill gives the program additional funding of $330 million per year for five years, more than tripling the current annual allocation.

Musicians are happy about language included in the legislation that will increase the credit for qualified expenditures relating to music scoring and music track recording by musicians. Further, the bill will urge Congress and the International Trade Commission to investigate aggressively and impose sanctions and tariffs on elements of production, including music scoring, visual effects and virtual photography, protected by the Tariff Act, to combat unfair and illegal competition from international parties. END_OF_DOCUMENT_TOKEN_TO_BE_REPLACED